Climate Apocalypse? Are We Doomed? No! Follow John Paul Jones!

Wildfires, droughts, floods, drenching hurricanes, and killer tornadoes are increasingly deadly. At least one foot of sea-level rise cannot be stopped; the oceans are too big. In the climate-metaphor movie, Don’t Look Up, we all die. Climate change is getting worse and Governments throughout the world are not fixing it. There are people who say we all will go extinct, there’s not a thing we can do about it, so we shouldn’t even try. Climate scientist Michael Mann calls such people doomists. But are the doomists right? Is fighting climate change an exercise in futility? Are we fighting a battle we know we are going to lose? Is it too late? Do we give up? No!

WE HAVE NOT YET BEGUN TO FIGHT! 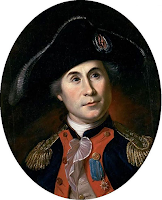 In the American Revolutionary War, a U.S. boat fought a stronger British ship of war. The American captain and his crew were outgunned. His ship was losing and appeared likely to sink. Asked if he would surrender, the captain, John Paul Jones, is famous for replying, "I have not yet begun to fight." He was a brilliant captain. His crew fought on, until an American grenade caused a gunpowder explosion on the British ship, and the British surrendered. John Paul Jones won. He is known as the father of the American Navy.

That is the attitude that will save mankind.

It is undeniable that climate disasters are getting worse and are killing people at an ever-increasing rate. But we will beat this. Even if the very, very worst happens, we will come back and win. In what is called “The Great Extinction Event” (the end-Permian), ninety percent of all life on Earth died, but it came back. If the climate apocalypse should get that bad, so there are only a few human couples left alive, we will fight and rebuild. But we will not let it get that far. Young people are urging us to begin to fight, and we will. To begin to fight, we must vote for carbon taxes. We must stop subsidizing the fossil-fuel industry and strongly subsidize sustainable industry. We most vote to fund climate-technology innovation and greenhouse-gas draw-down innovation. We must vote to change industrial farming to become regenerative farming. We must stop investing in corporations that destroy us and start investing in companies that save us. As John Paul Jones said,

WE HAVE NOT YET BEGUN TO FIGHT, BUT WE WILL FIGHT. AND WE WILL WIN

Who am I? Why am I writing this? I am a novelist, creating a powerful global warming novel as part of my personal war against the climate crisis. I need a great publishing company to market the novel and print a lot of copies. Publishers look at an author's social media numbers as a sign of potential buyers. Please help. Friend me on Facebook, Follow me on Twitter, and connect with me on LinkedIn. Also, please share and comment on what I post. Consider it as doing a small part in saving humanity from the ravages of global warming. Thanks.

Posted by Shawn Oueinsteen at 2:01 PM No comments: